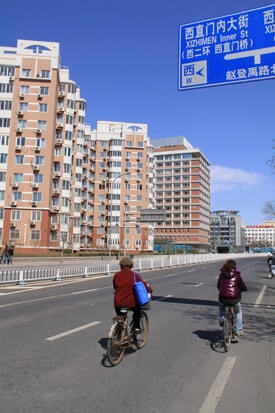 Walking might be pleasant in some parts of the city, especially in the Gulou and Houhai area, but it won’t get you far. There's not much to say, except for watch out when you cross the road. The pedestrian crossing or even green lights do not mean that you won’t get run over by a car, and an annoying rule allows cars to turn right, even when the lights are red, unless a separate red light prohibits doing so. Although in theory pedestrians are supposed to have priority on pedestrian crossings, it's different in practice. A stern look into the driver’s eyes normally does the trick and they stop. If not, well… The same rule applies as for many other Asian countries as well. Whoever is stronger goes first. You are not stronger than anybody when you are a pedestrian.

By far the most convenient means of getting around in Beijing is still by bicycle. Although the traffic conditions are less and less suitable for riding a bike, for distances up to around 10 km, it is still probably faster to ride the bike than to take a bus. We recommend that everyone staying for longer than a month should get a bike, as it will facilitate transportation invaluably.

New bicycles can be bought from 120 CNY upwards, while used ones normally sell for 50-60 CNY. You do not need a fancy bike, as bicycle theft is common in Beijing, and your first bike will probably no longer be with you after a couple of months. Also, make sure the lock you put on it is not worth more than the bike itself. If there is a reason to buy a new bike instead of a used one, it is that most used bikes on the market were stolen from someone and by buying it, you would support this already flourishing “sector”. People have reportedly found their own bikes on the market. 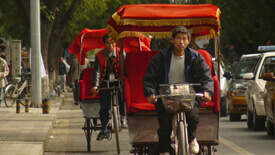 Although riding a bike is still probably the most convenient means of getting around in Beijing, you must be careful and watch out for the traffic, because the once very wide bicycle lanes are getting narrower by the day and cars are intruding onto them, sometimes in the opposite direction than you would expect, and they just love listening to the sound of their own horn, but often forget where the brake pedal is located in the car. Same things apply for the traffic lights as written in the “On Foot” section. Be especially careful with taxi and bus drivers. These are the two most dangerous kinds of animals on the roads. You can notice that at least half of the accidents you see on the roads involve either a bus or a taxi, often both. One dangerous move is when the bus enters the stop and pulls over to the right, where people are biking. If you are biking right behind it, you have three choices:

1. Stop and wait for the bus to go on. This is probably the safest choice, but also the slowest and the stinkiest one. However, we encourage everyone not to put safety at risk for the half minute you would gain by either;
2. Taking over from the right, in which case you should watch out for the people getting off the bus, because they do not watch out for anyone coming from behind. (Also make sure the bus does not “squeeze” you to the pavement) Or
3. Taking over from the left, which is ok if you start pulling to the left in time as soon as you see the bus coming in, but make sure there are no cars coming behind you. 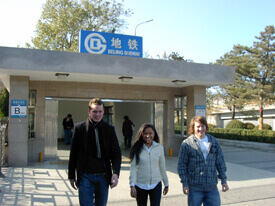 The subway is the most reliable form of public transport. There are just no traffic jams underground (yet), crazy taxi and bus drivers aren't an issue, and regular trains means you never have to wait on the platform for more than five minutes during the daytime. Beware though, the metro gets extremely busy during rush hour.

The city-wide price for taking the subway ranges between 3 - 9 CNY, depending on where you are going. Beijing is busily expanding its network of subways and in the pre-Olympic period 3 new lines were opened. There are an impressive 7 lines being planned for the coming years.

Line 1 is a West – East connection starting at Pingguoyuan. It stops at, amongst others, Tian’anmen square, the sophisticated Wangfujing shopping street and the modern CBD business area. Line 1 goes East until Sihui East Station where a transfer to the Batong line (further to the South-East) is possible.
Line 2 is a circlar line around the city centre, having stops at interesting places such as the Lama Temple, Dongzhimen (with its red-lantern restaurant street the perfect location to start a night out) and Qianmen. Importantly Line 2 also has a stop at the Beijing Railway Station.
Line 4 goes from north to south on the west side of town. It goes to the Summer Palace, Zhongguancun (the electronics market), Beijing Zoo, and Xidan, among other areas.

Line 5 goes from the upper North to the lower South of the city. It crosses all the lines but no. 8 at some point – Line 1 at Dongdan, Line 2 at Lama Temple and Chongwenmen, Line 10 at Huixinxijie and Line 13 at the suburbian Lishuiqiao.
Line 8 was especially built for the Olympics and is a small connection which only consists of 3 stations, including the Olympic Stadium and Olympic Forest Park.
Line 10, for a long way, parallels the third ring road and is the only subway line which connects with the Olympic Line (8). It is the line which crosses the West Side of Chaoyang area, where many foreigners live and work, and where most of the business in Beijing is done.
Line 13 is shaped like an upside down "U" and at both ends it connects to Line 2 (Xizhimen and Dongzhimen). Apart from Beijing’s main student area (Wudaokou) it doesn’t go to any places which would normally be of interest for Hutong School students. 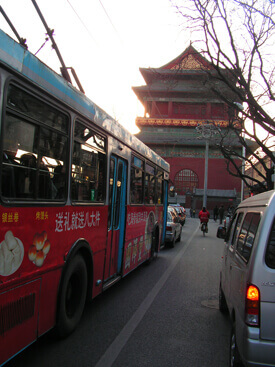 Buses in Beijing are OK, but traffic jams make them ridiculously slow. They are also often crowded. Generally, try to avoid the rush hour from 7-9am and 5-7pm. Take the subway or ride your bike at these times, and preferably at other times too.

Ticket prices vary according to the line. Most buses numbered below 500 cost 1 CNY. Buses 700-900 are newer ones, some have air conditioning, and prices depend on the distance covered. Tickets range from 1 to 6 CNY depending on the specific bus and the number of stops you travel. Tell the conductor where you are going, and he will tell you how much it is. Tickets are purchased on the bus. Some buses have no conductors; in this case passengers get on through the front door and throw 1 CNY into the box next to the driver.
You can now get a prepaid card for a deposit of 20 CNY at most subway stations which will get you discounts on bus tickets of up to 60%. 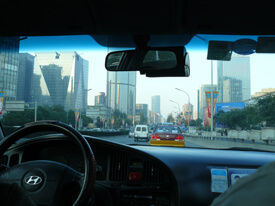 There are some 68,000 taxis in Beijing, so getting one within a couple of minutes should be no problem even in the middle of the night (you might have difficulties finding a free cab when it's raining, though). They are also quite cheap. Prices have been unified recently and all taxi’s now cost 10CNY for the first 3 km and 2 CNY for every additional km or for every 5 minutes you are stuck in traffic.

Between 11pm and 5am, fares increase by 20%, and rates start at 11 CNY, rather than 10 CNY. Taxi capacity is 4 passengers. Occasionally they might take more, but if they get caught the driver will be fined, so he has every right to refuse to take more than 4 people.

Do not go with unofficial taxi drivers. Sometimes random people with cars will stand on the side of the road and shout “Hello taxi!!!” Make sure that they all have meters, and taxi driver registration or licenses. Also take the receipt at the end of the trip. Just in case you left something (like your mobile phone) in the car, this is your only hope to recover it, assuming you had an honest driver.