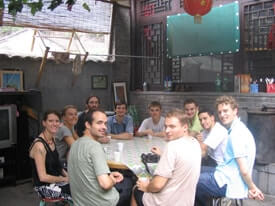 The variety of food available in Beijing is ab-so-lu-te-ly amazing. As far as Chinese food is concerned, you can find many different regional specialties from all over China. Many small restaurants are popping up across the city, offering a great variety of flavours. Since Beijing has become a true metropolis in recent years, the number of restaurants offering Western and various Asian cuisine has boomed. Check out our ‘foreign food section’ for this!

Here are some suggestions for a good Chinese meal!

Sichuan Food in Beijing
The “Chéngdū Xiăochī” (成都小吃) chain offers dishes from Sìchuān province, which are famous for their spice, and very popular among Chinese people from all over the country. There is one just south of Hutong School Apartments at Jiaodaokou, but the owner seems to be from the Northeast, instead of Southwest, where Sìchuān is. The tastes are good though, and prices cheap. A meal usually costs less than 10 RMB/person in any of these small restaurants. Yúxiāng ròusī (鱼香肉丝) and Gōngbăo jīdīng (宫保鸡丁) are well known dishes even outside China, and originate from Sìchuān province. 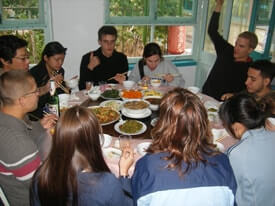 Qīngzhēn Restaurants
The “qīngzhēn” (清真) restaurants are run by Chinese Muslims who mostly come from the Northwest of China, mainly Qīnghăi and Gānsù provinces. You can easily identify these restaurants by the green decoration, pictures of Mecca on the wall, the staff wearing white hats typical of Chinese Muslims, and often of the roast lamb sticks (Yángròu chuàn; 羊肉串) they are selling right in front of the restaurant. They are quite unique, one can also be found on the narrow alley south of the Hutong School Apartments at Jiaodaokou, not far from the Chéngdū Xiăochī (成都小吃) mentioned above. The staff of qīngzhēn restaurants normally speaks Chinese with a funny accent, as they are minority people and Chinese is a foreign language for them just as much as for you. The mutton sticks mentioned earlier are a must-try; they normally sell for 0.5 or 1 RMB, depending on the size. These restaurants also sell a special kind of pastry which is somewhat reminiscent of Arabic pita bread but salty and sometimes topped with a spicy sauce. It goes very well with the lamb sticks. Another specialty is the “chăopiàn” (炒片), which consists of fried noodle squares topped with tomato sauce, some vegetables and lamb. Lamb is a favorite among Northwestern Chinese, and remember that pork is taboo in these restaurants, so don’t even mention it. Food is good, but service is normally slow to mediocre. 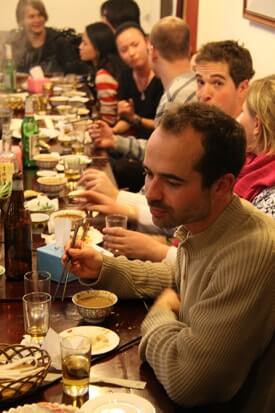 Hot Pot in Beijing
Hot pot, or “huŏguō” (火锅) has many kinds, but the best known one originates from Chóngqìng city, which also used to be a part of Sìchuān province until it gained municipality status in 1997. Hot pot basically consists of a pot with a boiling soup, and is one of the “do it yourself” kind of foods, as all the meat, veggies and other things are served raw and are supposed to be cooked in the soup for a brief time. The soup can have a mild taste (qīngtāng; 青汤), spicy (málà; 麻辣), or you can also ask for a “yuānyang guō” (鸳鸯锅), which is divided in the middle and one half is filled with spicy, the other one with non-spicy soup. Hot pot is especially recommended in the winter time, as merely sitting next to the boiling soup can warm you up. It is one of the more expensive Chinese foods in Beijing, but definitely very unique and tasty. Count with around 20-25 RMB/person.

Hot pot restaurants can be found in a great number between bĕixīnqiáo (北新桥) and xiăojiē (小街) just a short walk east of the Hutong School Apartments at Jiaodaokou. This street is especially worth a visit in the evening hours, as it is full of red lanterns.

Chinese Fast Food
Small Chinese fast food restaurants can be found at some places (like “Chinese Burgers’ Home” at Wŭdàokŏu), and are normally not so special. One that is worth a mention is Mălán Lāmiàn (马兰拉面). Lāmiàn (拉面) is a specialty originating from the Northwestern city of Lánzhōu, and is a type of soup with handmade noodles. The noodle’s recipe is formulated in such a way that it can be made very thin without breaking. The chef pulls the noodle to the length of an arm span, then folds it in half, and pulls it again. Then he repeats this around seven or eight times, so the noodles become thinner with every pull and the number of “strings” doubles by every fold. When it is thin enough, the whole thing is thrown into a boiling soup, and they normally add a couple of slices of beef and some veggies. There is one Mălán store at Wángfŭjĭng (王府井; see later in this section), as well as many other places around the city. 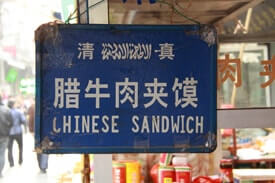 Chinese snacks (Xĭaochī; 小吃)
Beijing is not particularly famous for its local “xĭaochī”, but one good thing about the capital is that you can eat food coming from all over China. We have mentioned the lamb sticks earlier in this section, which is a northwestern specialty, and can be found at many places in the city. Follow your nose.

Bāozi (包子) and jiăozi (饺子) are northern specialties and can be found in abundance in Beijing. They are quite similar in the way that both of them are pastries with some kind of filling, but bāozi are round and steamed, and mostly eaten for breakfast, while jiăozi are more crescent shaped and cooked or fried. If you are in Beijing, these are foods not to miss.

One place where a lot of street vendors congregate is at Wángfŭjĭng (王府井), which can be reached by subway (Line 1) or in 15 minutes by bike from the Hutong School at Gulou. The road running perpendicular to the walking street at the northern end of it is lined up with “xiăochī” from around 5 o’clock in the afternoon till 10 in the evening. You can have all kinds of strange things like silkworms, scorpions, sparrows, pigeons, sea animals, cicadas etc., all deep fried. Also around the middle of the walking street, there is a huge gate on the western side of the road, and going in that gate offers similar delicacies, but for a lower price. The smell of “stinky doufu” (chòu dòufu; 臭豆腐) is all around the area, and one often has “flashbacks” of the smell at night after going home. It is an experience not to be missed.

Western and other Asian foods
For Western or other Asian food try some of the below restaurants. We have not personally tried all of them, but they seem to be among the more popular ones in Beijing. Always expect to pay more for western food than Chinese. A full western meal costs around 40-100 RMB per person, depending on the place. Prices for Japanese and Korean food are in between.
Italian food in Beijing 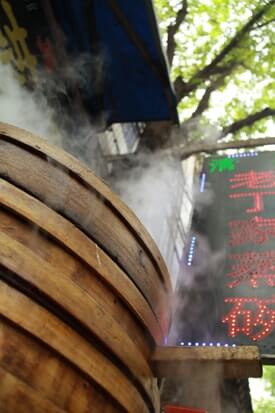 Western fast food
If you get the craving for burgers or fried chicken, McDonald’s (Màidāngláo; 麦当劳) and KFC (Kĕndéjī; 肯德基) can be found all around the city. There is a McDonald’s right opposite the street north of The Hutong School office, but they can be found at many places around Beijing. The nearest KFC is around 2 km away from the office, on the northwestern corner of the intersection at Dì’ānmén (地安门). There’s also Starbucks (xīngbākè; 星巴克) for the caffeine addicts, but is considered pricey in China. Pizza Hut (Bìshèngkè; 必胜客) has a few stores in Beijing as well as other big cities, and is also not for those on a tight budget. The one not too far from the office is at Dōngzhíménwài (东直门外), a little west of (before you reach) the Canadian and Australian embassies. There is also a Burger King, but there are only two, one of which is in Terminal 3 of the airport.