Hey everyone. I hope you are all doing as fine as I am! The past days have been incredible. I’m going to give you a brief update on what I have done!

So as you may or may not know, the Chinese New Year just passed and we’re now in the Spring Carnival for 2 weeks. A friend of mine, Delphine, arrived on the 18th in order to celebrate the New Year in Beijing instead of Shanghai. That night we went to the restaurant with a couple of friends and had some crazy nice dishes (as usual). After that we decided to go to a little bar, close to where I work and have a couple of drinks. It was very cozy in there, and filled with expads, I didn’t quite understand how that was possible, there were plenty of them. Anyway we went outside around 23:50 in order to fully enjoy the fireworks. As we went out we had to avoid quite some crackers already just to be able to cross the streets. It was simply amazing, I have never seen something quite like it. There were fireworks everywhere! All around us, just 30 feet away, in every single direction. We took some pictures and movies of it, it was both scary and thrilling. After a while we decided to take the cab home, good thing too because the smog rose from 40 to over 500 that night due to the fireworks. 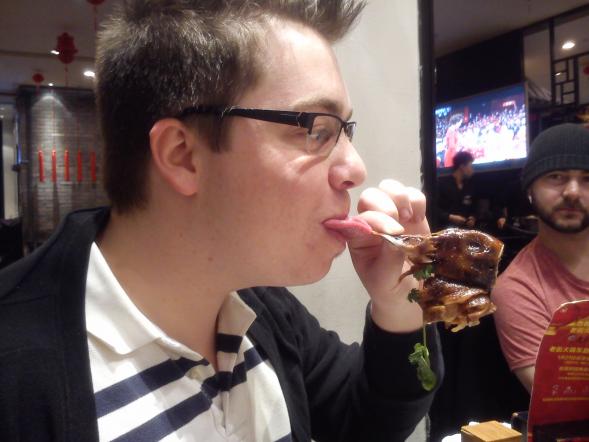 The next day we went to an Indian-styled brunch at the apartment of my colleague. It took us a while to figure out how to get there as we were supposed to get out of the subway and take exit C. Unfortunately there was one exit called C1, C2 and C3. Darn it! Well after about 40 minutes we finally found the place! Lucky for us we were still the first ones to arrive :D. After a while everyone was there and we could enjoy the delicious food that they made for us. After a good meal and a good laugh (and some good drinks) we played some quiz and a game called ‘Cards against Humanity’. It was great fun! We left the place somewhere in the afternoon and in the evening we went to our usual restaurant with my flatmates (Tong wu).

The following days we had our thoughts directed towards tourism. The first day we went to the Temple of Heaven and the parks surrounding it. Having snow falling for a while made the whole things wonderfully pretty. The park was very pretty and it was really fun to watch the children build snowmen. After that we went to a local restaurant and ate some Hot Pot (for the first time, nom nom!). In the afternoon we decided to go Tian’Anmen square and surrounding Hutongs. The Hutongs were really cute and crowded. The little alleys and streets are fun to wander by! The Square itself was also really fun to be at, unfortunately we could not see that much due to the bad weather (smog). So I am definitely heading back there!

The last day of visiting Beijing with Delph we started by going to the Earth Temple (I was quite certain it was the Lama Temple, until we noticed there was no lama temple in there heh heh). So by chance we arrived there and could enjoy some of the local carnival festivals. There was a live band, there were loads of market stances, stalls, games to be played, et cetera. It was quite an experience. We didn’t have that much to see but it sure was worthwhile. Upon leaving this place we managed to find the real Lama Temple so we went in. The place is extremely beautiful. I can’t call it peaceful yet due to fireworks still cracking everywhere, but I am definitely going back there! I loved it. In the afternoon we decided to meet with Hope (event manager of Hutong School in Beijing) and some other students/friends at Chaoyang Park. Again we had the possibility to enjoy some festivally stuff! It was fun but we did not stray too long as we had had our fair share of festival in the morning!

That’s it for now. I just arrived in Shanghai after a 5-hours train ride. It was quite comfortable and it passed quickly, with some nice sights to be seen outside.

I will add some pictures as soon as I can!

Bye all, and hope to hear from all of you.